Sorry for the delay in rolling out the 4th Edition of DevRelCarousels! This week, I wanted to dig deeper into the world of Developer Evangelists, one of the most important people in any tech company, with a focus of making developers aware of the platform.  As for any role in DevRel, their role is highly confused with a lot of others. To be frank, a DevRel role always changes according to the company’s need and their market fit. But, this is true for most of the unconventional or new jobs that get created due to a new development in the ecosystem. The Business to Developer (or B2D) market is fairly new, and DevRel, the key people in making it successful, have to work in all pathways. They are the reason behind this ecosystem being much more inclusive, strong and rewarding for everyone involved! For the sake of this series, I’ve focused on an ideal Developer Evangelist job, shying away from the extra things they might need to handle alongside. 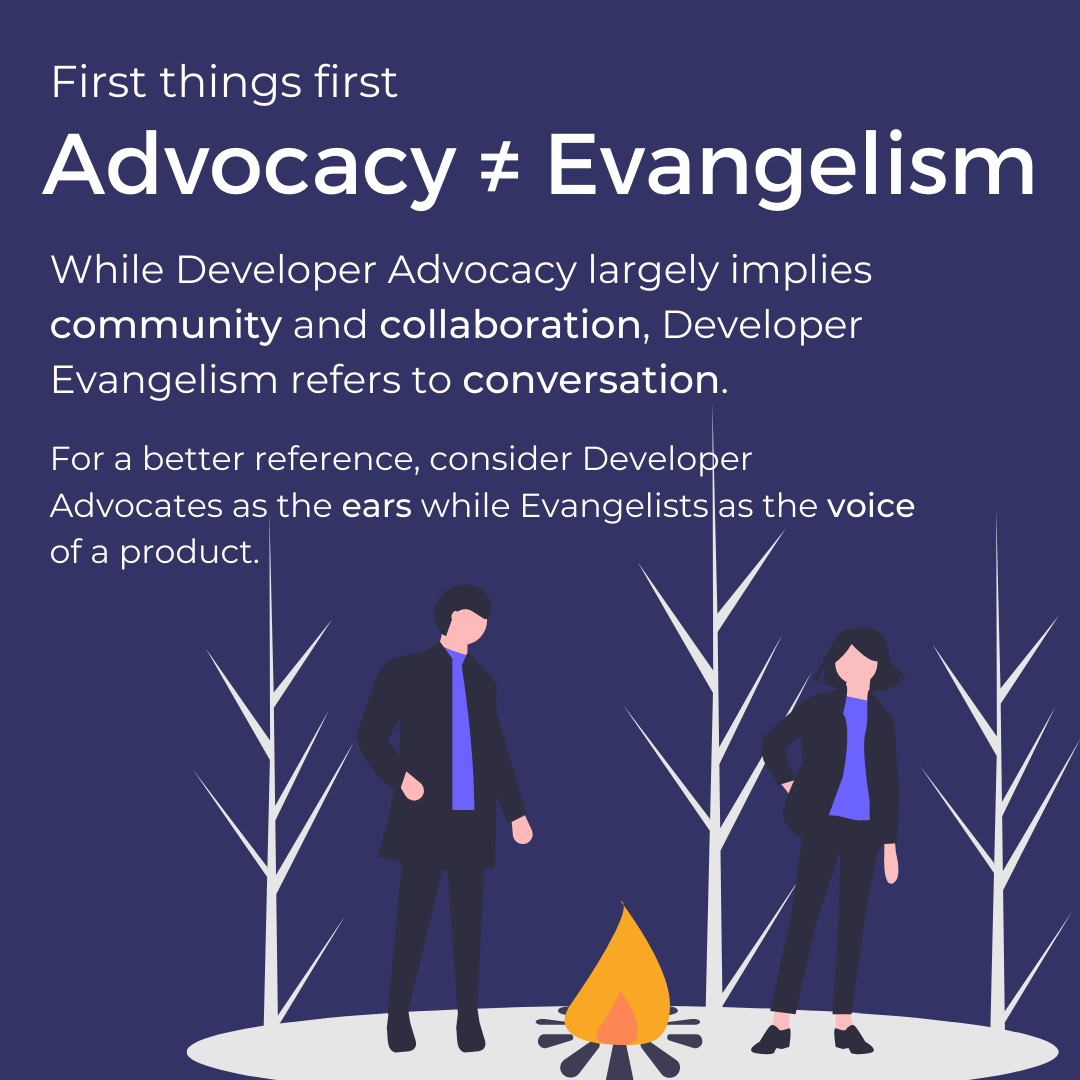 As the title suggests, let’s clarify this in the beginning - Developer Advocacy and Evangelism are not at all the same thing. People always have an argument that if you’re in the field of DevRel, largely you’re doing the same thing - ie. talking to the developers. But they do not realise, as the B2D sector grew, the job role of DevRel expanded. This eventually led to all the different sectors, where the focus is on one aspect and the knowledge of others just adds to it. The difference between Developer Advocacy and Evangelism is the same as between a Frontend Developer & a Backend one, a DevOps Engineer & a Cloud Engineer, a COO & a CMO!

A better way to portray this is, of course, imagining Developer Advocates as the ears and Developer Evangelists as the voice of a company’s product. 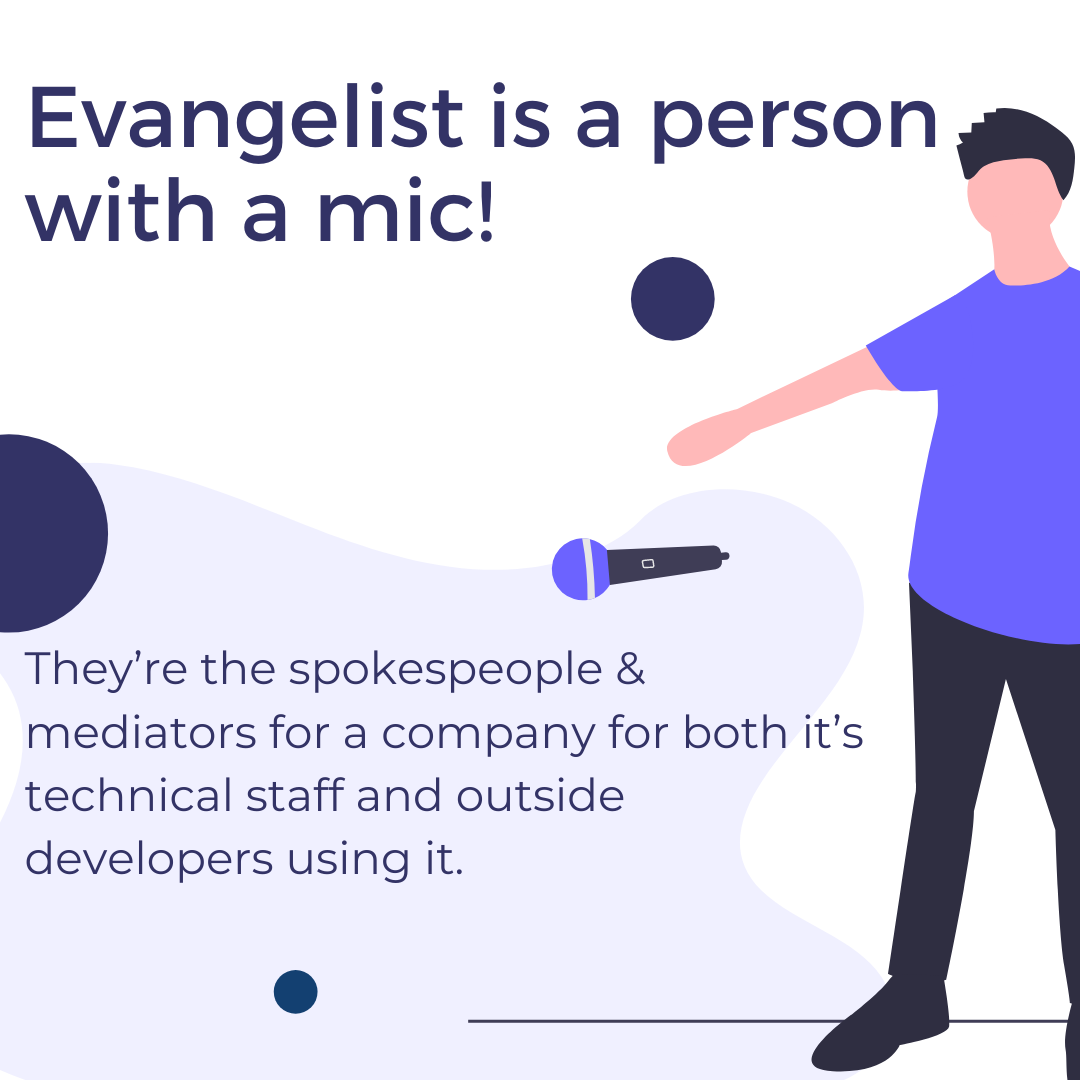 Talking about a voice, a mic always comes into the picture. Developer Evangelists can be easily imagined as that person with a mic. Their ability to share information accurately and precisely is what makes them suitable for this job. Giving hundreds of talks in a year, Developer Evangelists are conservationists. Being people whom developers tend to listen to, they are not just the mediators between a company and the outside developers using the product, they even help translate the product side to the internal technical team as well. 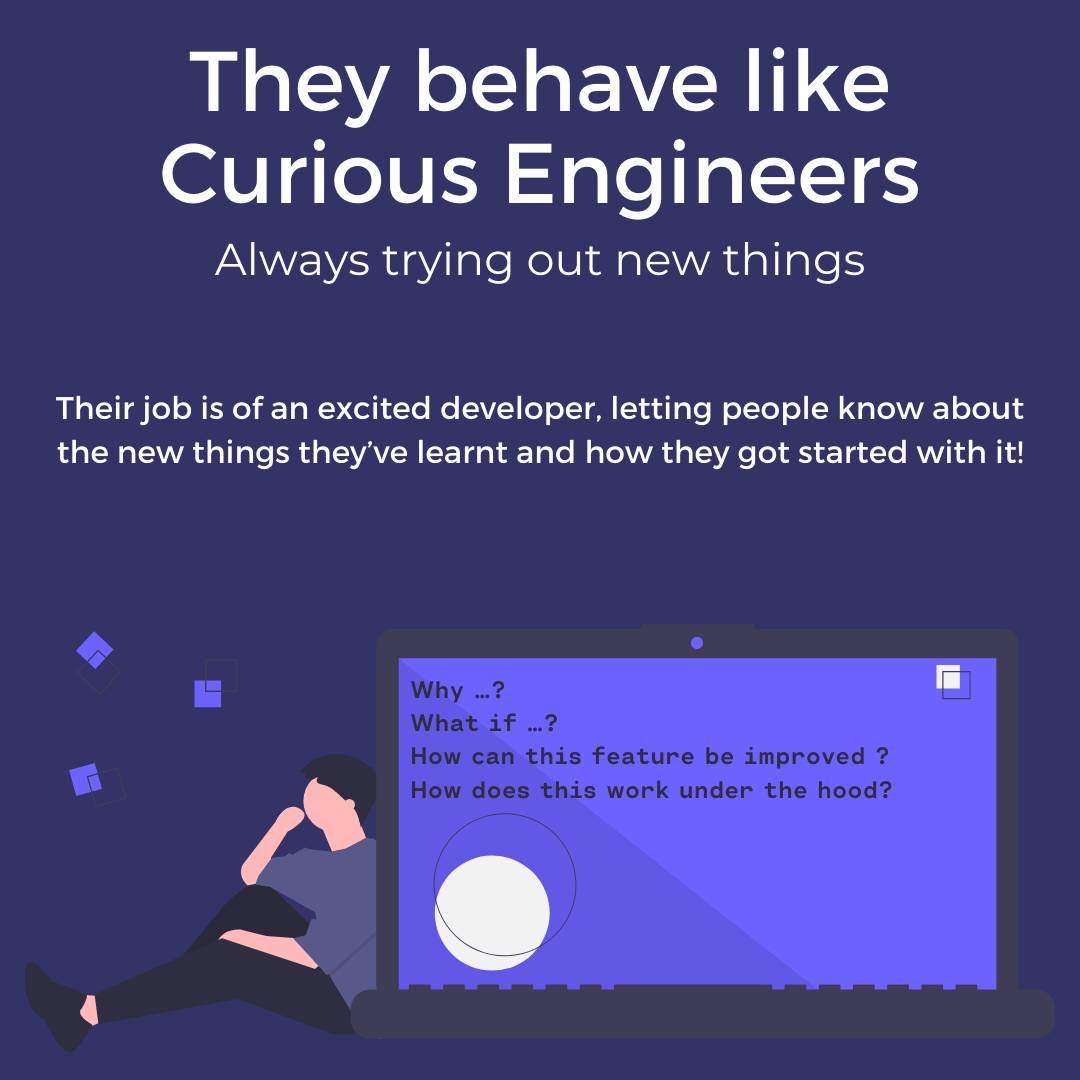 Developers are extremely loyal to products and technologies, once they are happy while using them. Rarely we find a developer who might be cool with jumping from Ruby to Python to JavaScript to Go to some other programming language and in between Mac, Linux or Windows. It is someone they listen to who can make a difference here. Developer Evangelists are those people. They have to experiment with whatever’s going in the market and let the extended community know about it. A curious engineer will always ask questions like “Why?”, “What if”, “How can this feature be improved?”, “How does this work under the hood?” - a Developer Evangelist should have an answer to that. 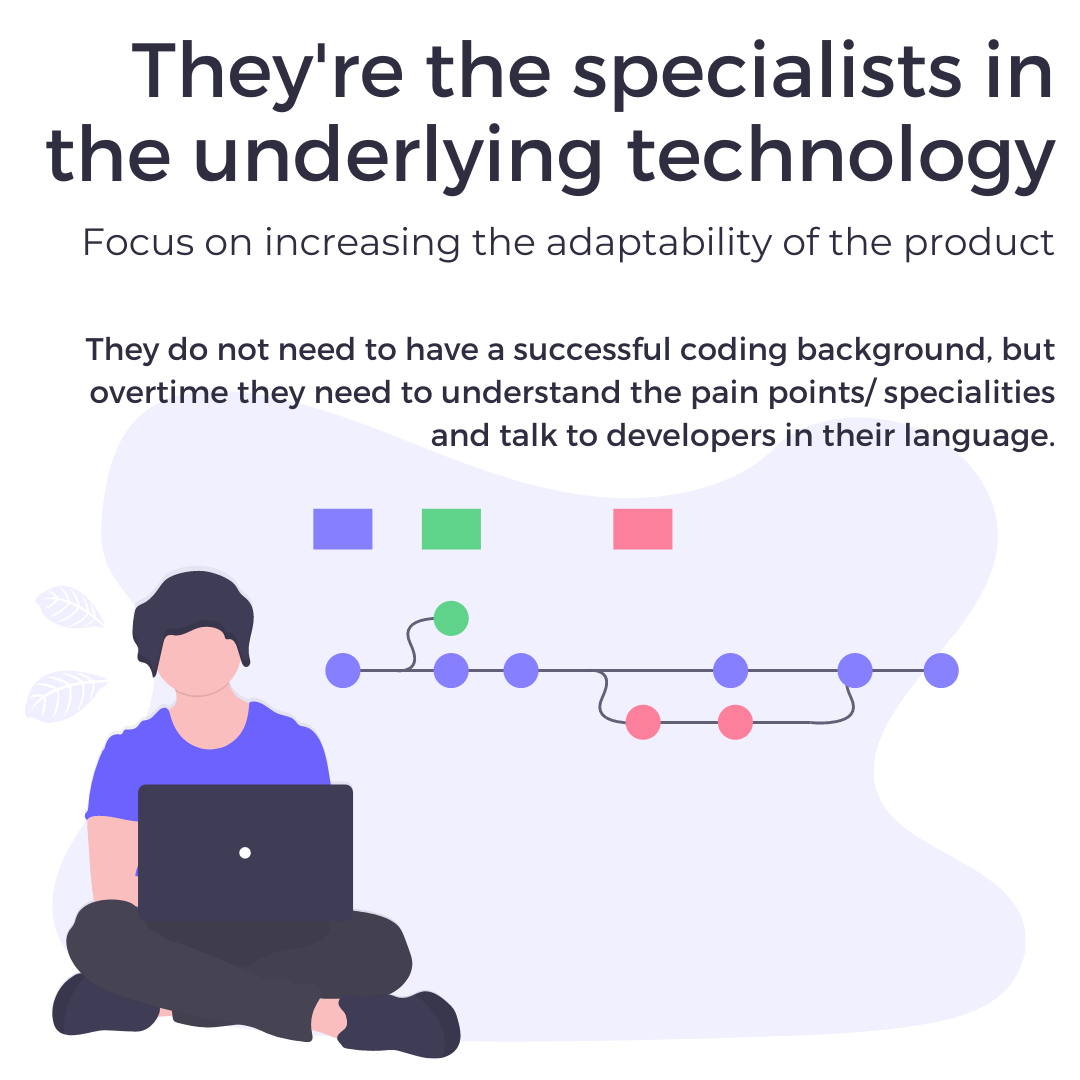 It’s not necessary for them to be a specialist initially or to have a successful coding background, but while evangelising a particular technology they need to be specialists speaking the specifics, addressing the pain points/ specialities and talking with developers in their language. Just imagine an Evangelist promoting a cloud technology does not know how Serverless works, it would be a nightmare for them to tell developers on how to use it. Though no one expects them to know everything, people expect them to speak the language of a developer who will be using that on a regular basis. 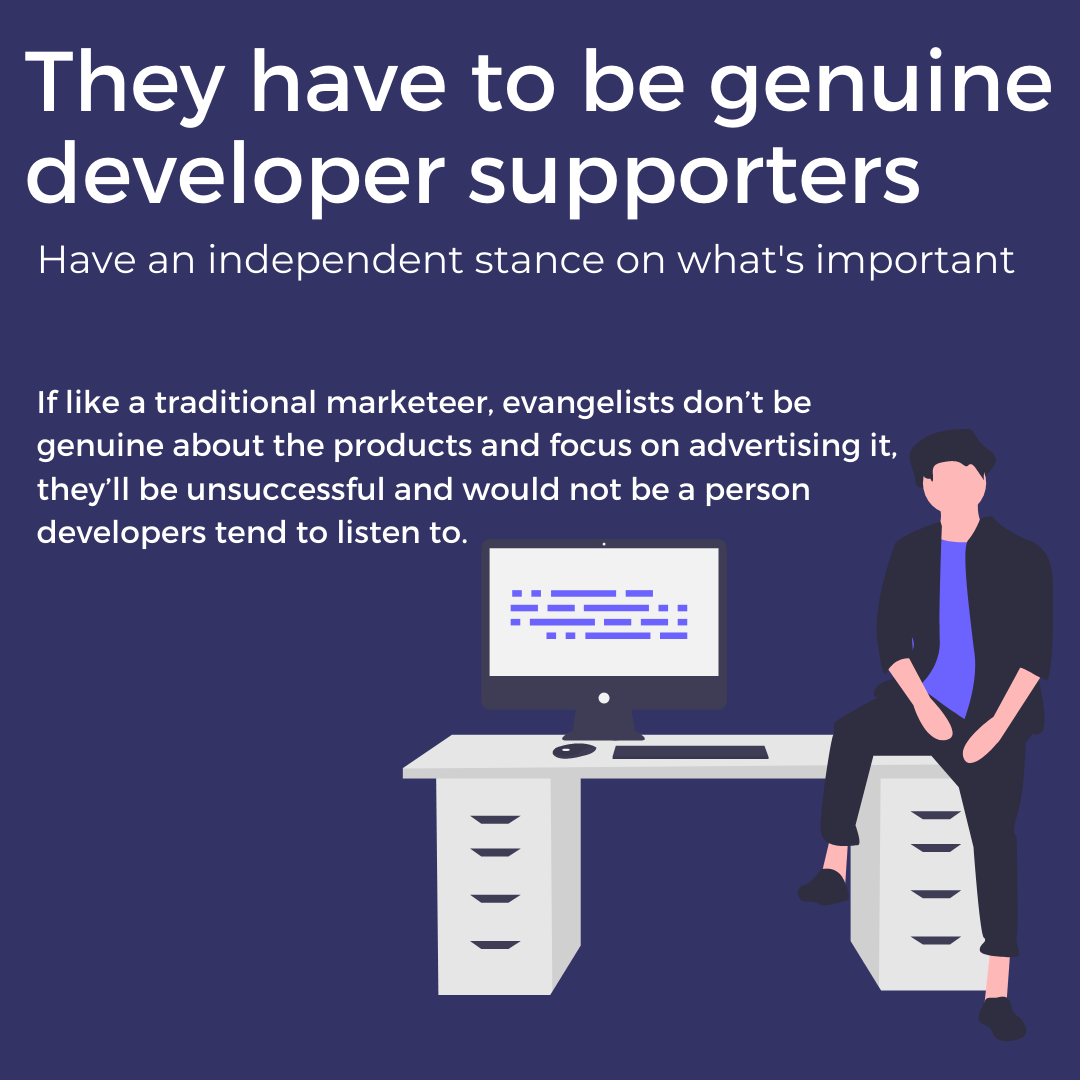 Developers are free to choose between products and tools. If the competition has a better product for a use case and the developers reach out to ask which one is better, a developer evangelist should admit the case. If not they’ll be behaving like a traditional marketeer and that would ruin the trust of the developers. While this might sound like a defeat for the evangelist, in reality, this has a huge impact on the community. Developers understand that the company accepts that they cannot be good at everything and their focus is on improving the product and not just to sell it. Developers appreciate evangelists as people who understand good technology. This can also be a great way of market research, where developers themselves will tell about the competitor product making it nice feedback for the product team. 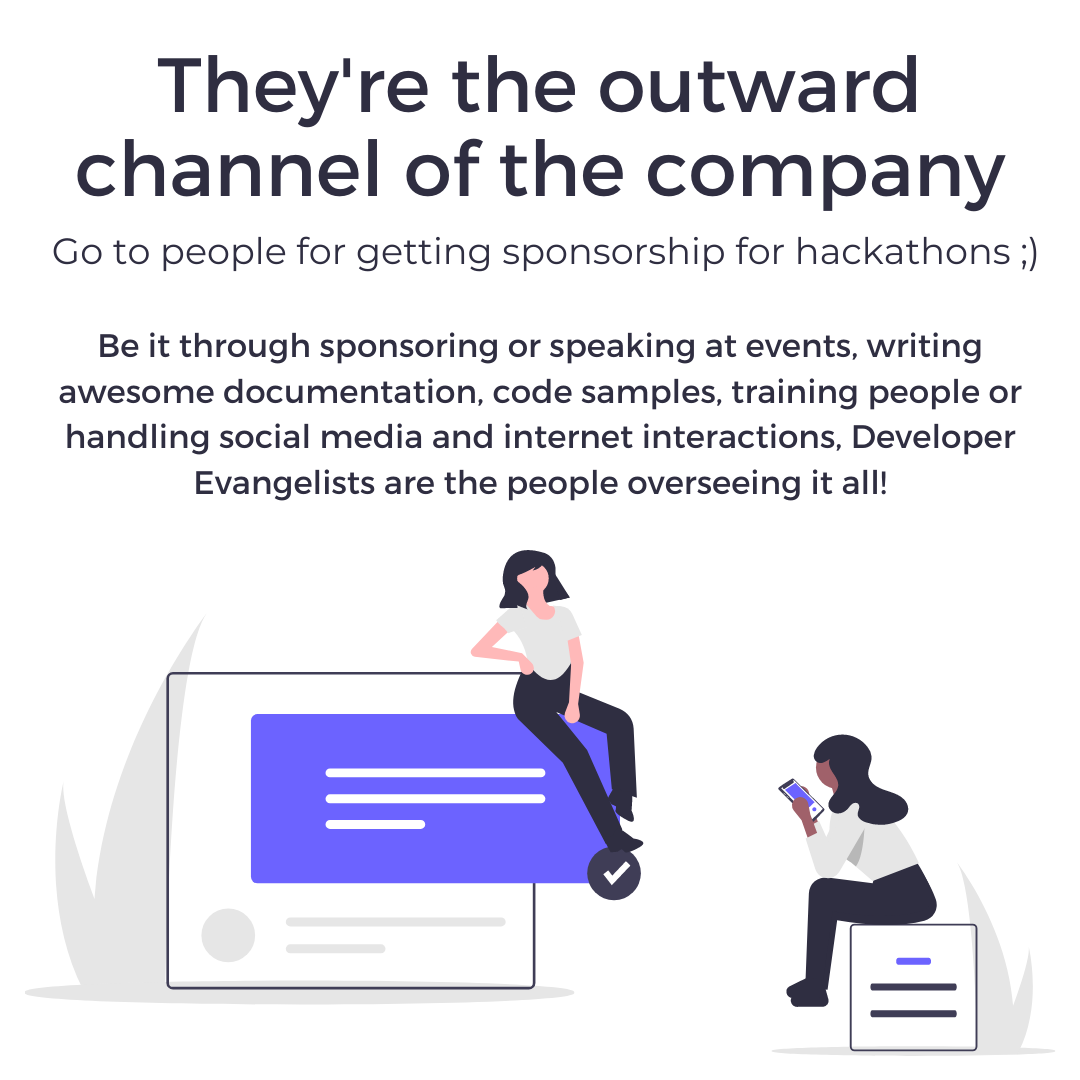 The best source of outward communication by a developer product is their documentation. Developer Evangelists also make sure that the documentation is at par, because, for a developer-focused product, documentation is one of the most important reasons for being adopted by fellow developers. Not just that, they act as a steward of open-source projects that the company starts or sponsors, including performing code reviews, contributing code to the project, writing public, open-source libraries to wrap APIs for the company’s products or even helping to integrate those into existing open source projects that might make use of them. Additionally, they are directly in contact with the PR and Marketing teams to help them understand the importance of the projects and the role that open-source plays within it.

I once read someone consider Developer Evangelism as a job of speaking at conferences, meetups or hackathons  -  using companies’ money to go around and have fun attending them.  While attending events is a major part of their job, the above statement cannot be farther from the truth. No company will ever spend money unless they see results out of it. It might look just travelling on the top, but engaging hackers is one of the major tasks - showcasing the impact one makes here is the ultimate goal.  The times of COVID19 have clearly showcased the impact Developer Evangelists make. Every week we’re seeing some great ways of making an impact making sure that the community stays together and grows together, even in the tough times. 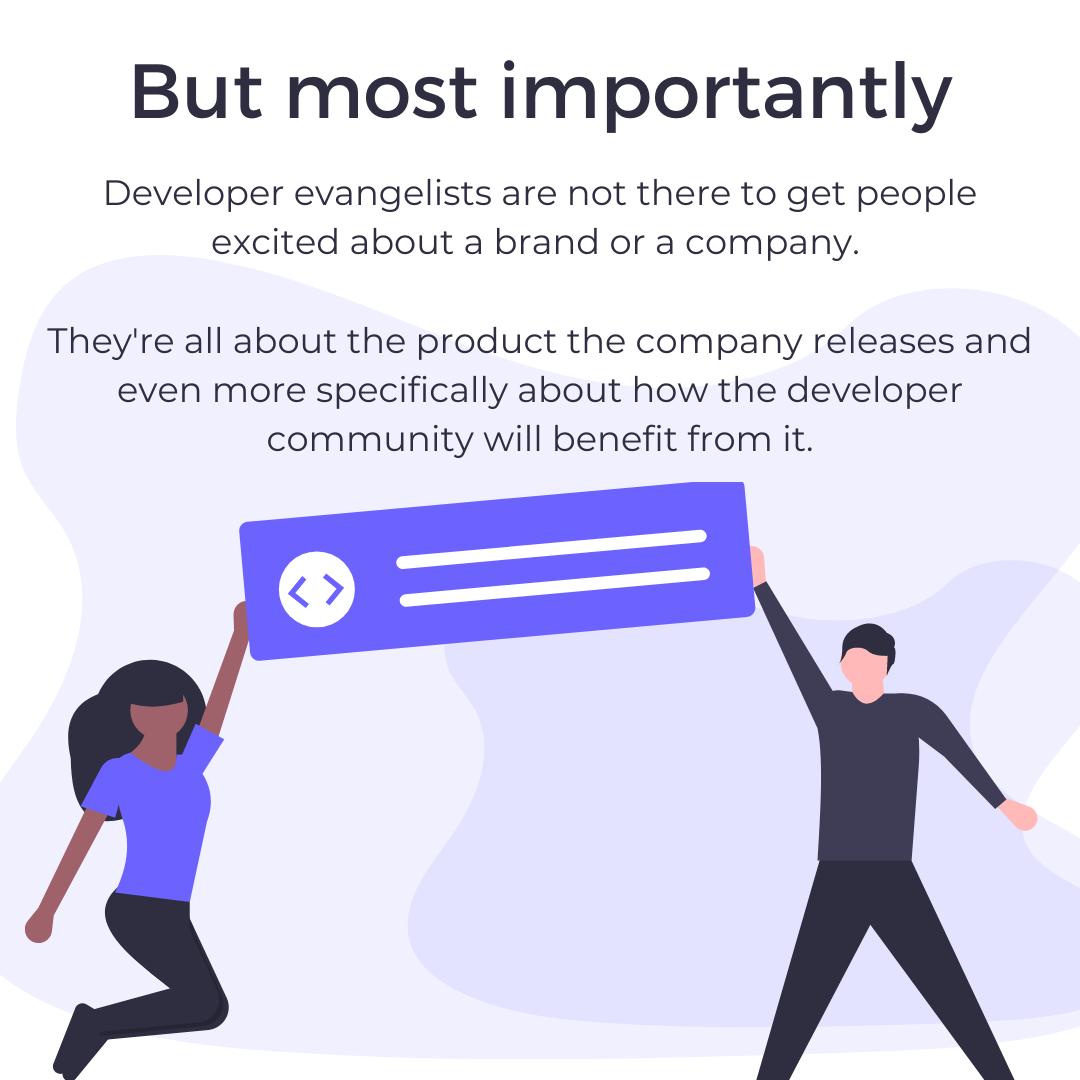